From an actor to a development aid worker
#section–featured-quote-block_5ea19025e1782
“ “There is no first, second or third world. We all live on one and the same planet, for which we bear joint responsibility.” “ 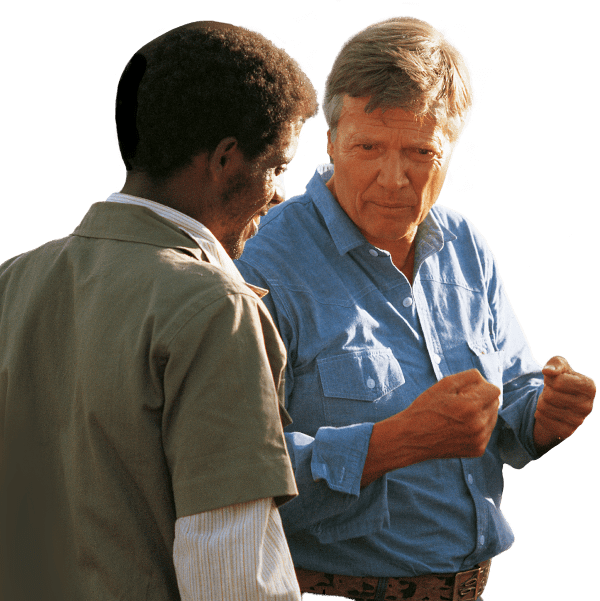 Menschen für Menschen was brought into being by Karlheinz Böhm. The actor, who became famous in the 1950s through his role as Emperor Franz Joseph at the side of Romy Schneider in the film trilogy ‘Sissi’, delivered brilliant performances in the films of famous directors such as Rainer Werner Fassbinder and on major German-language stages. Profoundly shocked by reports of the catastrophic famine in the Sahel Zone, in 1981 Karlheinz Böhm took advantage of his popularity to help. His legendary wager in the ZDF show “Wetten, dass…?” raised DM 1.2 million for people in Africa. He bet that “not every third viewer would donate one Mark, one Swiss franc or seven Austrian schillings for needy people in the Sahel zone”.

“Anger is the main motivation for my work – anger about the injustice between rich and poor.”

In October 1981 Böhm flew to Ethiopia for the first time. Not far from Babile in eastern Ethiopia he met about 1,500 semi-nomads who were leading a miserable existence in a hunger camp without prospects for a better future. He founded the organization Menschen für Menschen on 13 November 1981.

To date over six million people have benefitted…

Two years later the farmers were relocated to the Erer Valley, 30 kilometres away. The hunger camp at Babile was closed for ever.

With the aid for the people of the Erer Valley, Karlheinz Böhm laid the foundation stone for his aid for self-development.

For many years he was accompanied by his wife Almaz Böhm, whom he got to know and love in 1987. He met the people at eye level. His main concern was to work together with them in Ethiopia on improving their life situation. They should develop themselves, so that in the long term they will be able to live without outside help. The Foundation still operates according to this principle today.

… from Karlheinz Böhm’s “aid for self-development”.

38 years later over five million people are benefitting from long-term projects aimed at enabling farmers to become more productive and promote the development of huge regions. In eleven project regions, on an area of about 57,000 km², Menschen für Menschen is currently working together with the population on the improvement of living conditions. Eleven areas have already been handed over to the responsibility of the population. One of Karlheinz Böhm’s wishes has been fulfilled in part: “One day not to be needed any more.”

Karlheinz Böhm – a man for the people

#section–slider-block_5ea19312e178c
Böhm was born in Darmstadt on 16 March 1928 as the only son of famous conductor Karl Böhm and soprano Thea Linhard.
5. Drawn to the stage from an early age, in 1948 he received his first brief engagement as a theatre actor at the legendary Vienna Burgtheater. This was followed by a number of years at Vienna’s famous Theater in der Josefstadt.
Karlheinz Böhm became world famous through the ‘Sissi’ films, made between 1955 and 1957, in which he co-starred as Emperor Franz Joseph with Romy Schneider.
Böhm appeared in a total of 45 cinema films over a period of three decades, celebrated numerous triumphs on the big stage and played impressive characters in four film productions by Rainer Werner Fassbinder. He played what was probably his most controversial role in Michael Powell´s Peeping Tom (Augen der Angst).
It all began in 1981 with the appearance of Karlheinz Böhm in Wetten dass..? In the TV show on May 16 he claimed hat “not every third viewer would donate a Deutschmark, a Swiss franc or seven Austrian shillings for people in the Sahel zone”.
Although Karlheinz Böhm won the bet a total of 1.2 Million DM was collected. In October he flew to Ethiopia for the first time and visited a refugee camp in Babile.
Karlheinz Böhm founded the relief organization Menschen für Menschen in Germany on November 1981.
In 1982 it began with the resettlement of 2,100 refugees from south-eastern Ethiopia in the Erer Valley
Berhanu Negussi has been Karlheinz Böhm´s constant companion since the beginning. In the early years he translated for him to facilitate direct contact with the people. Today Negussi is Country Representative.
During one of the most serious droughts in Ethiopia in 1984 Menschen für Menschen rescued hundreds of thousands from starving death.
Karlheinz Böhm, 1985: “I met Mother Teresa caring for starving people in Ethiopia. She said: “Let´s stop talking, and start helping.” “How right she was.”
In 1985 Menschen für Menschen supported 85,000 people who had been resettled by the Ethiopian government from the drought regions of the north to Illubabor (western Ethiopia). In 1998 the humanitarian project in Illubabor was upgraded to an integrated rural development project.
In the early years Karlheinz Böhm recorded his experiences in Ethiopia on a portable typewriter, to inform the world about the incredible poverty he has seen. This heralded the beginning of today´s NAGAYA MAGAZINE.
Karlheinz Böhm met Almaz for the first time in May 1987. After completing a two-year course of study at the Agricultural College in Awassa, she has worked for Menschen für Menschen since early 1986 as Head of the Livestock Breeding Department in the project area Erer.
In 1992 the Agro Technical and Technology College (ATTC) was opened in Harar (eastern Ethiopia).
In 1996 Menschen für Menschen opened the Abdii Borii home for children and young people in Mettu in Illubabor province.
In 1998 Mettu Hospital in Illubabor was renamed Mettu-Karl-Hospital by the authorities in honour and recognition of Karlheinz Böhm. It was officially reopened in 2001.
In 2002 ZDF and ORF acknowledged the 20-year commitment of Karlheinz Böhm with a live gala show. The viewers donated more than 5.8 million euros.
For his tireless commitment in Ethiopia, Karlheinz Böhm 2003 received the first honorary doctorate from the western Ethiopian University of Jimma.
During his stay in Ethiopia in 2004 German Federal President Horst Köhler and his wife Eva-Luise Köhler visited the Agro Technical and Technology College (ATTC) of Menschen für Menschen in eastern Ethiopian town of Harar.
In 2006 no less than 21 lord mayors bet with Karlheinz Böhm that one in three of their citizens would donate one euro. The first city wager was born. The resulting donations of over two million euros form this initiative went towards funding the construction of then schools in Ethiopia.
In 2008, Almaz and Karlheinz Böhm launch the new educational programme “ABC-2015” together with Heidemarie Wieczorek-Zeul. Its goal is to enable hundreds of thousands of children to benefit from a school education by 2015.
As a result of the grand ZDF Gala “Congratulations Karlheinz Böhm – a life for Africa” in 2008 viewers donated a total of 7,445,657 euros for the foundation.
In 2011 Menschen für Menschen launched the second city wager. 22 cities and two special betting partners bet against Almaz and Karlheinz Böhm that one in three residents of their city would donate one euro. Over three million euros came together for educational projects in Ethiopia. 14 schools were constructed.
“How wonderful it would be, if one day the people of Ethiopia came to thank me and say that we achieved so much in common, and that they won´t need me anymore.”
Karlheinz Böhm, the founder of the aid organization and the former actor, died on 29 May 2014 at the age of 86 in his place of domicile not far from Salzburg. For over 30 years he had campaigned for better living conditions in Ethiopia.
Don't miss a thing: In our newsletter we regularly present our work in Ethiopia and inform you about our events and campaigns in Germany.
The Menschen für Menschen Foundation - Karlheinz Böhms Ethiopia Aid is a public foundation under civil law. It is registered with the Munich tax office under the tax number 143/235/72144 and was last exempted from corporation and trade tax by decision of 11th June 2018 for the promotion of tax-privileged purposes and thus recognised as a non-profit organisation.